Imagine being asked to watch turtles’ hatch.  Definitely an offer no one would refuse.  In order to witness it you would have to travel to a picturesque island resort about 25 minutes by speed boat off Kavieng town in the New Ireland Province.

The island is called Lissenung translated to “place of rest” in the local Tigak language.  It certainly carries that vibe through its natural beauty combined with the contemporary and stylishly laid out bungalows that line the Island.

It would probably take you less than an hour to walk around the whole Island, which mind you is surrounded by a beautiful reef and turquoise waters.

On arrival you will be warmly greeted by resort owners Dietmar and Ange Amon who, although originate from Austria and Australia, have come to call New Ireland home.  Both with diving backgrounds and experience in the Tourism sector, it was this common interest that inevitably brought the couple together; 15 years on they have been inseparable.

Environmental conservationists at heart they walk the talk with everything they do, advocating for the natural environment to be left alone with minimal human impact.  This is one of the main reasons why they are naturally drawn to the rescuing of the critically endangered Hawksbill turtles.

“It all began when a turtle expert from New Zealand visited us and started telling us bout how turtle numbers were going down because they were being hunted by the locals for food.  And when we actually witnessed locals collecting the turtle eggs from one of the Islands called Raul, that’s when we knew we had to intervene.  We asked them for some, brought them to Lissenung and allowed them to hatch in a secure location,” recalled Ange.

“Everything we know about turtles has been self-taught through our own research, time and resources.”

On Saturday, January 16, guests from the nearby Nusa resort along with Lissenung’s guests were given a rare opportunity to witness the hatching of 89 baby turtles.

The air was filled with excitement as everyone including wide-eyed little children anticipated the arrival of the turtles.  The turtle eggs had been places in a raised sand box at the back of their office some 59 days ago.

Ange placed her hands over the circled area and gently lifted the sand and moments later one tiny turtle appeared, then another and another as she kept digging deeper into the sand pit.  There was no shortage of “oohs, aahs” and “see how cute they are” as the little Hawksbill turtles emerged, scurrying out ready to take on life.  Then a moment of silence was commanded by Ange” “OK everyone, stop talking! We need to count them.”

There were 89, the magic number.  After Dietmer recorded information on their biodata the turtles were placed in an open esky ready to be released into the ocean.  But not until sun down.

The evenings are chosen to release the turtles into the ocean to ensure safe passage, away from sea birds that might swoop down and gobble the turtles.

The wait to watch the turtles being released into the water was worth it.  Everyone lined up on either side forming a passage way.

“Switch your flash lights off please,” called out Dietmar.  Ange stood in the water with a flash light creating a guide for the turtles to follow while Dietmar tipped the esky over.  Their fate was now in the hands of nature, as God had always intended it to be.

Since the couple started rescuing turtle eggs in 2013, they have released close to 15,000 turtles into the ocean.  They continue to create awareness any chance they get on the critically endangered Hawksbill turtles.

The highly migratory turtles are protected by a number of international agreements but that protection is useless if awareness is not created at the village level.

The couple would like to see more engagement by fisheries and other maritime authorities to protect the turtles from extinction. 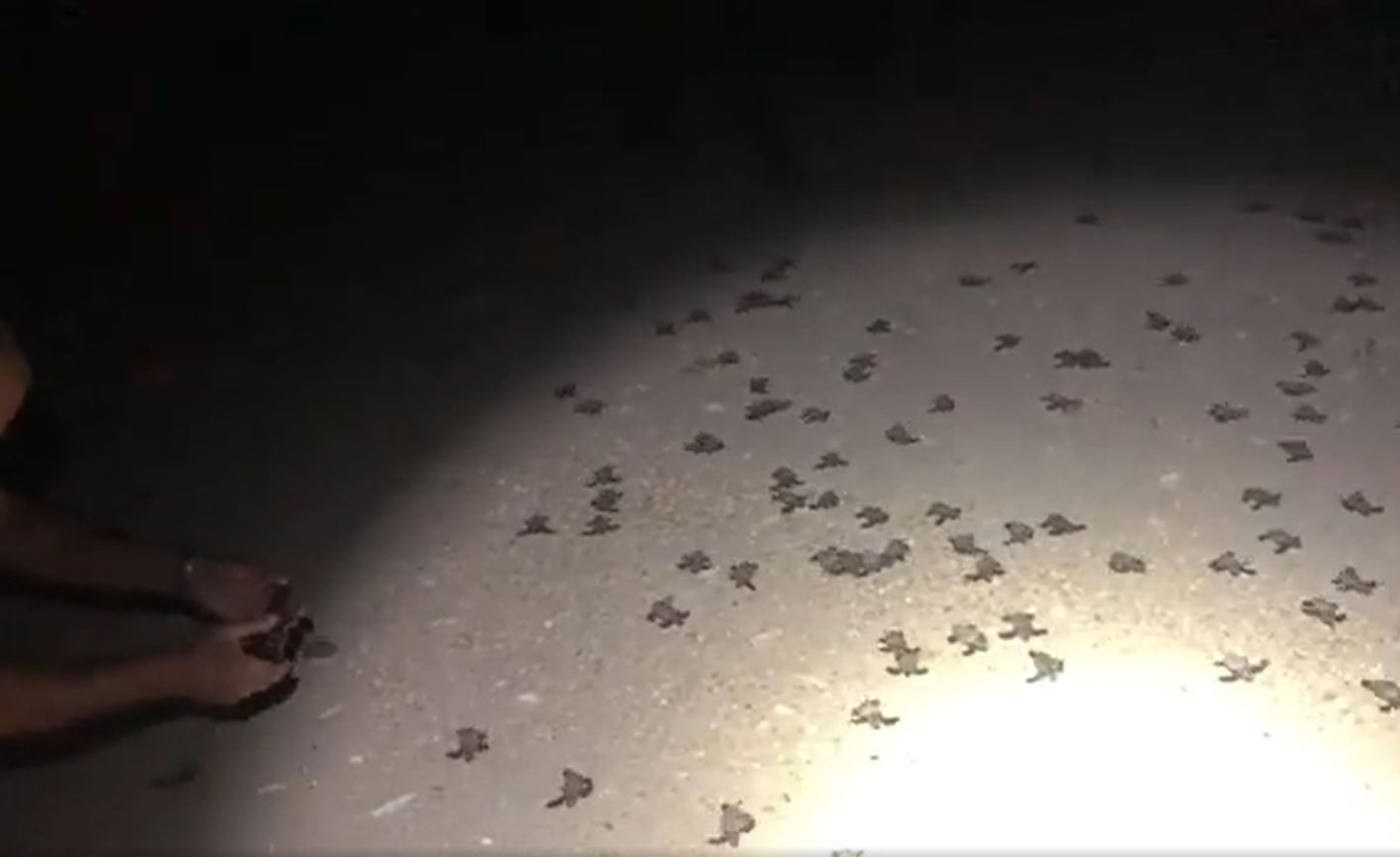 Above: Click on the image to visit the Lissenung Turtle Conservation Facebook Page to watch the video of the successful hatching.