The tourism industry in Papua New Guinea has been severely hit as a result of COVID-19 and the travel restrictions imposed to contain its spread, a survey has revealed.

The Business Impact Survey, carried out by the PNG Tourism Promotion Authority, was aimed at assessing the impact of the coronavirus pandemic on the industry.

A total of 44 respondents including hotels, tour operators, guest house owners, industry associations, airlines, product owners, and parks participated in the survey, which revealed massive losses they suffered in key areas of their businesses.

The survey found that 90% of bookings for 2020 were canceled (1,600 bookings canceled), an estimated K67.9 million in revenue lost, over 1,200 workers laid off, and all businesses reporting significant revenue drop for the year.

Of the respondents, 95% said they were affected by the pandemic when visitor arrivals to the country started dropping by February 2020.

They said the flight and cruise ship ban imposed after the first coronavirus case in PNG was reported on March 22 meant no visitor was coming into the country as a result of tough lock down measures.

With the vital tourism supply chain broken, no visitors were coming into the country, they said.

They said the biggest impact to their business was the cancelation of bookings for 2020.

Over 90% of the respondents said they had to cancel forward bookings for the year.

“Canceled bookings during the ongoing SOE period were expected, even though impactful. However, it is the canceled bookings eventuating in the 2nd, 3rd, and 4th quarters of the year that have really hurt the industry,” they said.

This has led to 74% of them closing down their businesses, or drastically reducing their trading.

These are mostly locally owned businesses whose closure impacts the national economy through loss of tax revenue as workers are laid off.

Bookings totaling 1,606 between the months of March 2020 and January 2021 have had to be canceled. This includes airlines, hotels, events, parks, trekking, diving bird watching, and cultural tour bookings, wiping off millions of kina in revenue.

Most of these individual and group bookings were for popular events like Kokoda Trekking, ANZAC anniversary event in April, Goroka and Hagen Shows, scuba diving and surfing, amongst others.

With no visitors arriving, all respondents reported significant decline in their revenue so far.

As a result, 58% have had to lay off their workers, or have wages of their workers reduced. A total of 1,209 employees (778 permanent, 431 casuals) were laid off. The layoffs were most apparent in hotel chains in Port Moresby and Madang.

It is estimated that survey participants would lose K67.91 million in revenue this year, with airline dropping up to K40 million, while hotels and resorts losing about K8 million. Overall, the tourism industry contributes over K0.5 billion to the nation’s economy every year. It will report far short of that this year, the survey found.

Commenting on the survey, Minister for Tourism Hon. Emil Tammur said the impact on the industry was an unavoidable consequence of an action the government needed to take to protect its citizens from a deadly pandemic.

He said it was hope the survey information could help the government understand the impact of COVID-19 on the industry, and how best the government could target any assistance from the K5.6 billion Stimulus Package to help businesses recover.

The novel coronavirus was detected in China in December 2019. It started spreading to neighbouring Asian countries by January 2020, and to other parts of the world by February.

Governments worldwide reacted swiftly by shutting down borders and imposing travel restrictions as tough measures were adopted to prevent the spread of the deadly virus as infection and deaths starting rising fast.

PNG reported its first case on March 22, which prompted the Marape Government to shut down the border, ban all flights into and within the country, and imposed a State of Emergency. 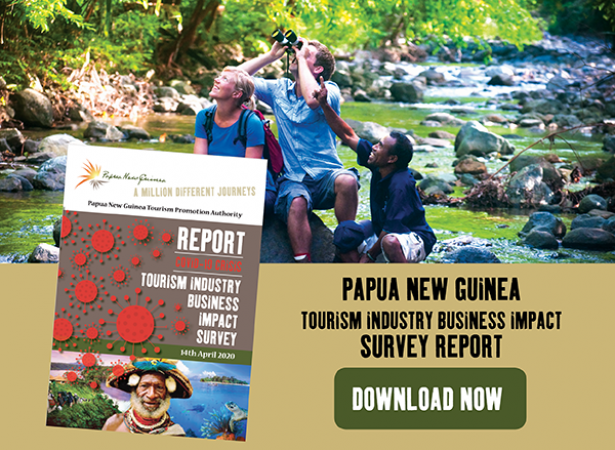 The PNG Tourism Promotion Authority brings you this interim report from a business impact survey conducted in April 2020. Click the download button below to download a copy.