The sponsored partnership with the PNGRFL offers PNGTPA an incredible opportunity to carry out promotion and awareness of Papua New Guinea as a travel destination at one of the world’s most prestigious sporting events in the United Kingdom (UK) – the Rugby League World Cup (RLWC).

The UK is also an important travel source market for tourism in Papua New Guinea (PNG).  The PNGTPA is utilising the opportunity at the RLWC to promote PNG as a travel destination worthy of its ‘A Million Different Journeys’ brand, all the while raising awareness that our country’s borders are now open, and that we are warmly welcoming travellers back into the country.

Two PNGTPA marketing officers and a cultural tourism ambassador join the PNG LNG Kumuls during the team’s community engagements and pregame entertainments throughout the five-week long tournament in England.

Warrington Market and the Two Brothers Café also invited the PNGTPA and PNG LNG Kumuls team for PNG Coffee Tasting and livestream on Saturday 22nd October, 2022. The Two Brother Coffee Shop will be selling PNG coffee throughout the RLWC and are happy to distribute destination marketing collaterals such as visitor maps, tourism product brochures, pamphlets and banners brought over by the PNGTPA team.

These and other events are opportunities presented to the PNGTPA by PNGRFL to participate together with PNG LNG Kumuls as side events.  As part of its mandate, the PNGTPA proudly promotes all Papua New Guinea products and services, this includes Accommodation, Tours, Travel & Leisure activities, Arts & Crafts, Food & Textile, Sports & MICE (meetings, incentives, conferences and events).

The highlight of the PNGTPA and PNG LNG Kumuls community engagements was the school visits to Bradshaw Primary School and Sacred Heart Primary School in Warrington.

The PNGTPA officers were given an opportunity to briefly share about travel and tourism in Papua New Guinea, while the cultural ambassador briefly demonstrated the colorful Huli Mali dance of Hela Province.

The School Principals and teaching staff were thrilled about the extra surprise by the Huli Wigman, commenting that this will have a lasting impact on an individual child’s life. The school visit presented the PNGTPA with a different angle to introduce the destination to a younger generation of future travellers.

The PNGTPA and PNG LNG Kumuls team will be visiting major cities and towns for more destination marketing engagements at public squares, photo opportunities and most importantly engaging with the public, while sharing wonderful stories and travel information about destination Papua New Guinea, the land of ‘A Million Different Journeys’. 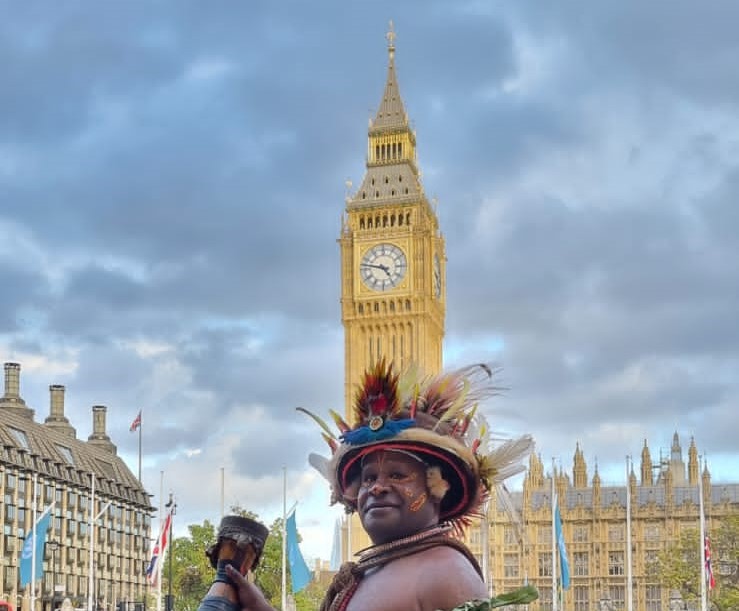 Images: Cultural tourism ambassador Cedrick John in London and Warrington engaging with the local communities, alongside team members of the PNG LNG Kumuls and the PNG Tourism Promotion Authority.