The people of Hohorita in the Northern Province remember the fateful eruption of Mount Lamington that claimed the lives of thousands in 1951.

Hohorita Village in central Oro Kaiva area of the Northern Province came alive on Thursday 21st January 2021, as the people commemorated the 70th Anniversary of the Eruption of Mount Lamington.

The eruption of Mt Lamington on Sunday January 21st, 1951 remains the single largest natural disaster in Papua New Guinea’s history as the hot air and gas from the pyroclastic blast travelled more than 14 kilometers claiming over 4,000 plus local lives locals and another 400 expatriate lives including the local district commissioner at Higaturu then late Mr Cecil Cowley and his son.

Last Thursday at exactly 10:15am when Sumbiripa (as the local Oro Kaiva people call Mt Lamington) blew its top in 1951, the devout Anglican parishioners led by the local priest kneeled down on the lawn and faced Sumbiripa as the church bell rang out the Angelus.  The old men and women wept openly as they recalled the horrors of that Black Sunday 70 years ago.

Tourism Promotion Authority in collaboration with the Sohe District Administration marked the anniversary by carrying out tourism awareness in the local villages leading up to the day of the anniversary. TPA Board Chairman Hon. Kennedy Wenge MP was a special guest of honor representing the Tourism Minister and the TPA.

Mr Wenge assured the local people that TPA would work with the provincial government to develop the event into a major tourism product especially for the expatriate families who lost their loved ones in the eruption. 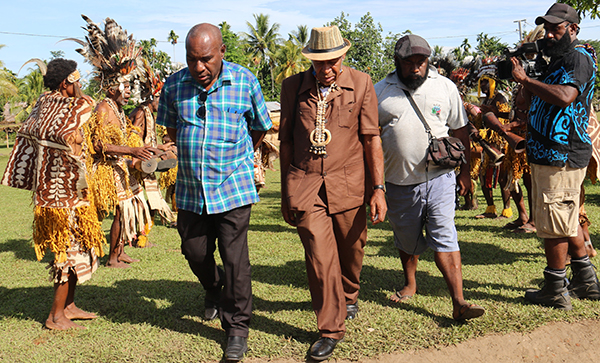