Minister Leonard assures predecessor he will carry on major activities left by the former Minister including review of the 1993 Tourism Promotion Authority Act.

In a brief hand-over-take-over ceremony at the Tourism Promotion Authority office in Port Moresby, December 2020, Minister Leonard assured his predecessor that he would carry on some of the major activities left by the former Minister including completing the review and enactment of the TPA Act and adaptation of the National Tourism Plan.

Minister Leonard also echoed his desire to promote domestic tourism given the current global pandemic caused by the Corona Virus which has literally destroyed world travel and tourism.

He said the government would like to see greater tourism benefits going directly to the local people in rural communities of our beautiful country Papua New Guinea.

He also stressed the need for the three agencies under his Ministry namely Tourism Promotion Authority, National Cultural Commission and National Museum and Arts Gallery to work in collaboration to drive tourism growth and development in the country.

Former Minister Schnaubelt assured the Minister that he has set the foundation for corporation among the three agencies especially in the area of identifying and promoting cultural festivals as well as developing historical sites for tourism. 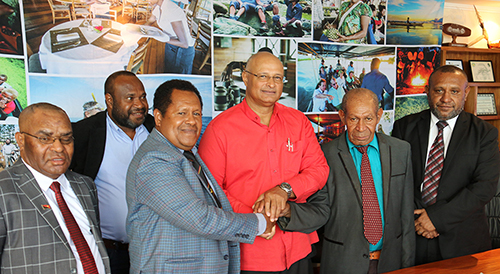