Reach For The Remote

As the world starts to slowly reopen, and as travellers make more conscious decisions about where they want to travel to next, we present to you 12 reasons why you should add Papua New Guinea to your 2021 bucket list.

1. ESCAPE FROM IT ALL ON A REMOTE PRIVATE ISLAND

The Conflict Islands are made up of 21 privately owned, pristine and completely uninhabited islands covering a total landmass of 375 hectares (or 3.75km square). At the Conflict Islands Resort you’ll find just six private beachfront ensuite bungalows, situated on the main island of Panasesa. There’s also a main house where guests can enjoy peace and tranquility whilst enjoying delicious fresh-caught local food, refreshing drinks, free wi-fi (if you want it), a stunning beachfront deck and a balcony overlooking the stunning archipelago and lagoon waters, with colours like no other place on earth. There aren’t many places in the world where you can truly escape in paradise quite like this. 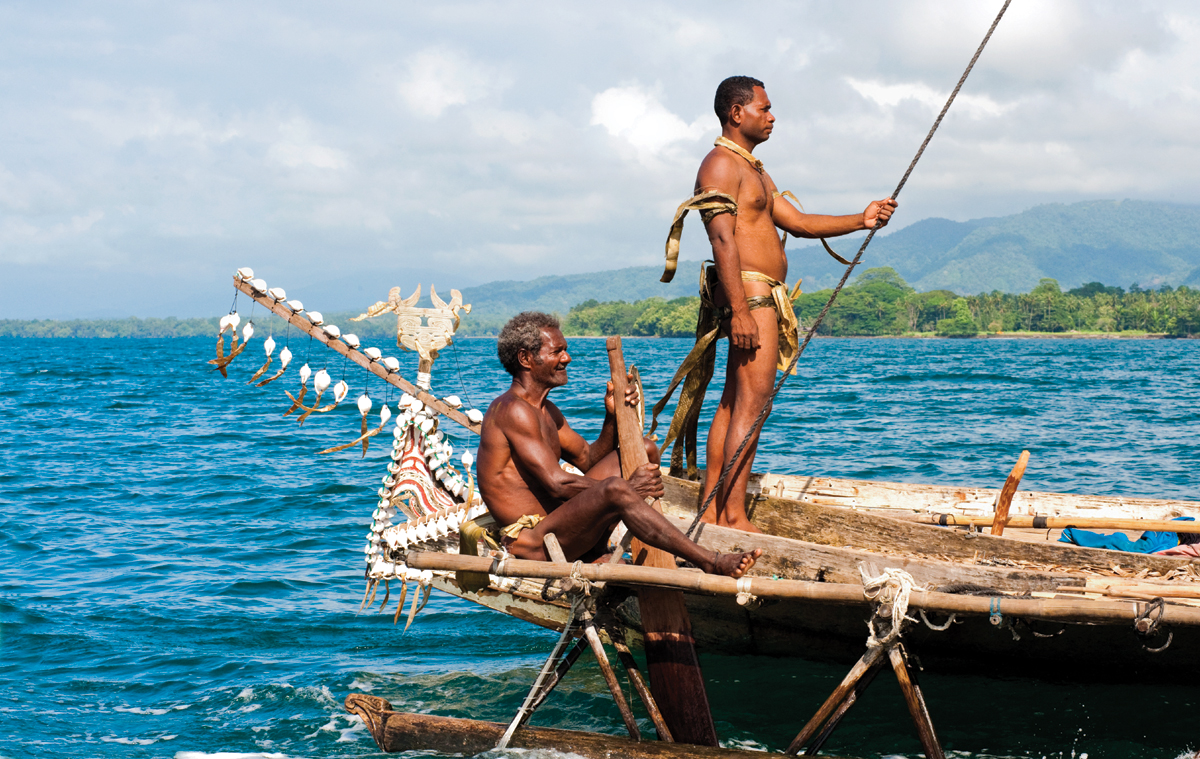 Divers and snorkellers have been coming to Milne Bay and the Tufi Fjords (yes Papua New Guinea has its own fjords!) for decades, but culture-seekers have only recently cottoned on to this unique part of the world. Alotau is the capital of the Milne Bay region, and plays host to the annual Kenu and Kundu Festival each November - a lively and colourful cultural display of war canoe racing and ‘singsings’ (traditional dances). Year-round you can discover harrowing skull caves, and can also learn to cook (and enjoy) a Mumu feast (a traditional meal of local produce cooked in the earth). Up the coast in Oro Province are the Tufi Fjords, home to the world’s largest butterfly (the Queen Alexandra Bird Wing; with wingspans of up to 28cm). Visitor participation in traditional daily life is welcomed by the local villagers, who will happily show travellers how to build traditional homes and canoes from sago palms, and how to hunt and gather for food. 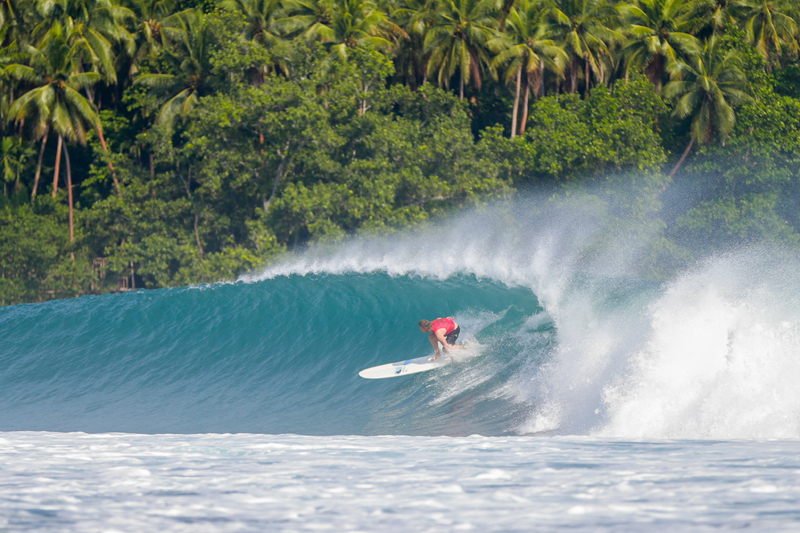 3. GO ON A SURFING PILGRIMAGE

Forget Bali with its overcrowded beaches; thanks to Papua New Guinea’s world-renowned Surf Management Plan, the number of surfers on any one break is capped, so you’ll never be stuck waiting to catch the perfect wave - plus locals are still able to surf their own breaks. Surfing is idolised in Papua New Guinea, as are visiting pro surfers. You’ll be just as likely to see locals surfing on hand-carved planks of timber, as you will Taylor Jensen (who won the 2017 Men’s Kumul PNG World Longboard Championships). Or even no one at all! And when you’re done surfing, there’s plenty of islands, waterfalls, caves and volcanoes to explore. The north coast of Papua New Guinea is our pick for keen surfers (it’s also a fishing and diving / snorkelling paradise too). Stretching for over 500km, the northern coastline of Papua New Guinea’s mainland is as chilled-out as it comes. Here you’ll find sleepy port towns and seaside villages (like Vanimo, Wewak and Madang) that offer the perfect respite for those who’ve just adventured to the nearby highlands or Sepik River. Spend the day paddling across aqua-clear waters to nearby deserted islands, explore local caves and waterfalls, or tuck into some fresh locally-caught seafood.

Check out Tupira Surf Club and Vanimo Surf Lodge, or go on a scheduled guided tour with World Surfaris or No Limit Adventures. Other notable mentions for keen surfers include Nusa Island Retreat and Rubio Retreat, both in New Ireland province. 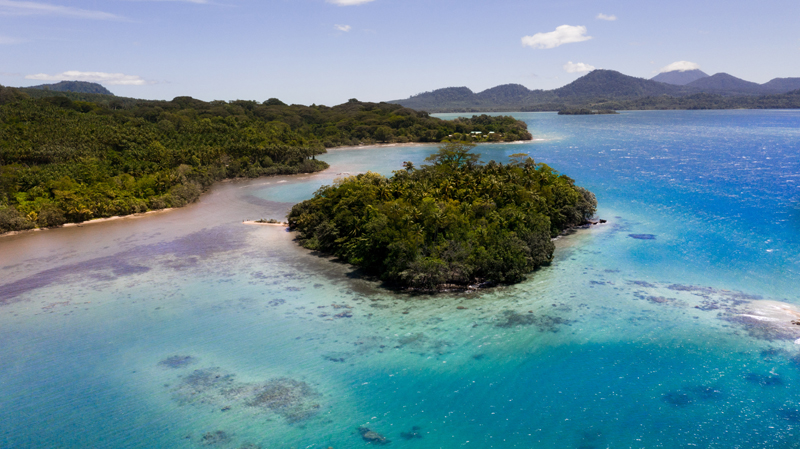 New Britain and New Ireland islands in the Bismarck Sea are popular with divers, surfers, history buffs and adventure seekers alike. These two easy-to-get-to islands are perfect for first-time visitors to Papua New Guinea. In West New Britain Province (accessible by flight to Kimbe) you can hike to the top of the active Gabuna Volcano crater, relax in a natural spa-like thermal hot river or visit the local firefly trees at night and see the rainforest light up. At the other end of the island in East New Britain Province (accessible by flight to Rabaul), a world of history awaits; from hidden Japanese WWII war tunnels and Admiral Yamamoto’s famed buker, to the ash-covered remains of old Rabaul town (destroyed by the nearby Mount Tavurvur volcanic eruption of 1937). And over on New Ireland (accessible by flight to Kavieng) you can go on a 5-day cycling adventure, travelling down the length of the 260km mostly-flat Bulominski Highway, stopping to rest at traditional village homestays along the way. 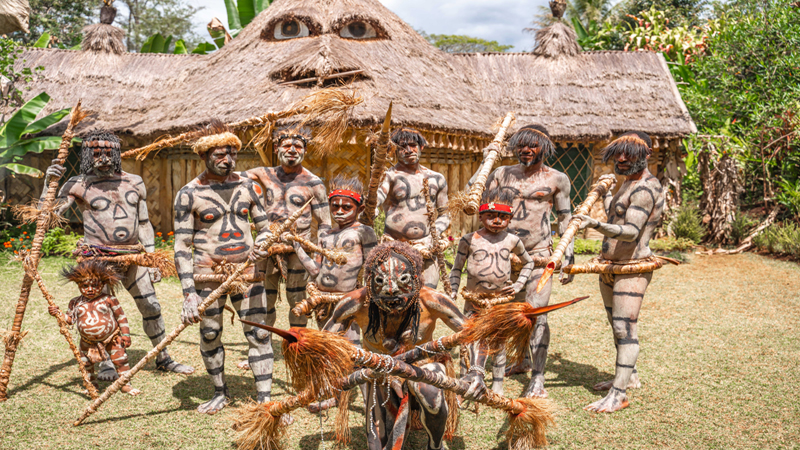 Mount Hagen and Goroka are the main tourism hubs within the remote highlands of Papua New Guinea. From here, a colourful world awaits, brimming with illusive tribes that still to today remain mostly hidden from the rest of the world. Visit Goroka and you’ll be met with an array of coffee and cocoa (chocolate) plantations; the rich aroma filling the air. But scratch beneath the surface and you’ll discover unique local tribes where traditional customs remain alive and well; like the haunting Asaro Mudmen famed for their spooky mud masks, and the Korekore Tribe who are best known for their Moko Moko (or ‘sex’ dance). Over in Mount Hagen, which plays host to one the oldest and most spectacular cultural shows, the annual Mount Hagen Cultural Show, you’ll also discover the Diugl Village and the spooky Mindima Skeleton Dancers, as well as the nearby colourful Huli Wigmen.

Check out Ambua Lodge, Bird Of Paradise Hotel & Apartments, Highlander Hotel & Apartments and Rondon Ridge for accommodation and tours, or go on a scheduled guided tour with Crooked Compass, Eclipse Travel or PNG Holidays. Or to journey further into hard-to-reach lost worlds check out Oceania Expeditions. 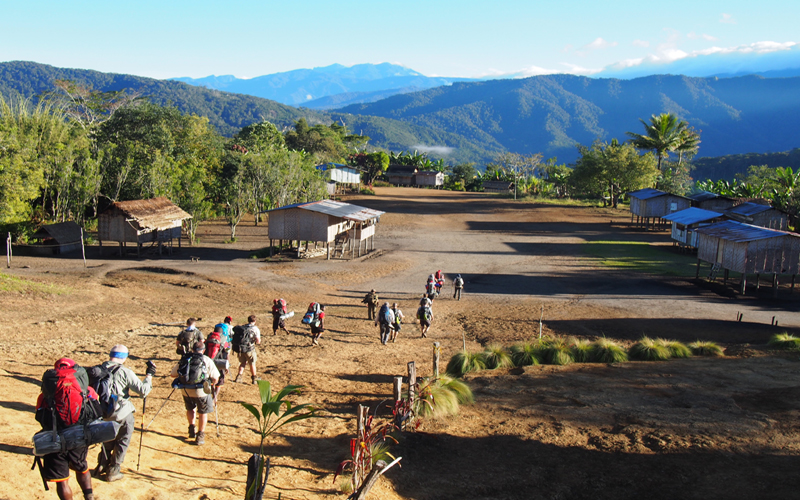 6. PARTAKE IN AN AUSSIE RITE OF PASSAGE

Trekking world-famous Kokoda is not only a 96km physical endurance challenge, it’s also a spiritual journey retracing the footsteps of the thousands of Aussie Diggers who were killed or injured defending Australia. Tours range from 6-12 days based on speed and fitness levels, and trekkers can also choose to trek from Poppendetta to Owers Corner or trek the reverse route. It is worth noting that Australia’s wartime history with Papua New Guinea extends beyond just the battle of Kokoda; the battle of Milne Bay was another key feat in Australia’s efforts to protect its sovereignty from the invading Japanese during WWII. 2020 marks the 75th anniversary of the end of the war in the Pacific, and the allied forces win. While international travel has prevented many Australians from commemorating the anniversary this year, many remain committed to ensuring this important part of history is still remembered (albeit a year later).

See Kokoda Track Authority for a full listing of trek operators running guided tours. For thoose who aren’t keen on trekking Kokoda, but still wish to pay their respects, then a visit to the Bita Paka War Cemetery near in Rabaul, and the Bomana War Cemetery in Port Moresby is a must. 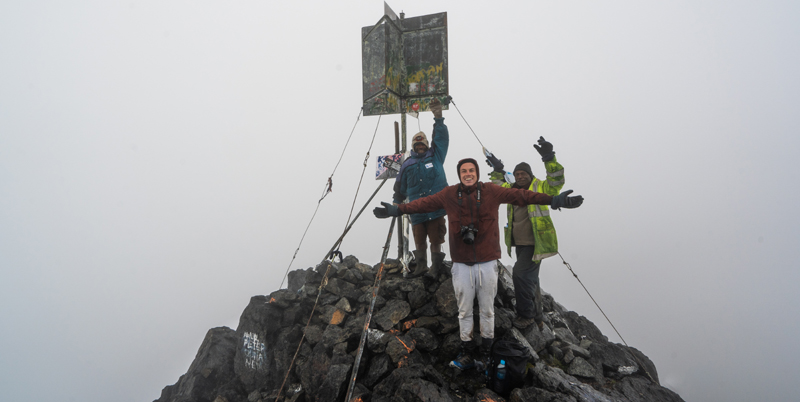 7. CLIMB ONE OF THE SEVEN SUMMITS

At 4,509m, Mount Wilhelm is not only the highest mountain in Papua New Guinea, but it is also the highest point in all of Oceania. Despite its height, Mount Wilhelm is actually the country’s most accessible mountain to climb. Usually a 3-4 day hike (accessible from Mount Hagen) including overnight stays at camps / villages along the way, the expedition will find you crossing rivers, climbing through moss forests, alpine grasslands and glacial valleys. Generally trekkers will summit before sunrise to truly enjoy the view out to the north coast and surrounding valleys, and if you’re lucky enough you might even get to spot a beautiful bird of paradise too. 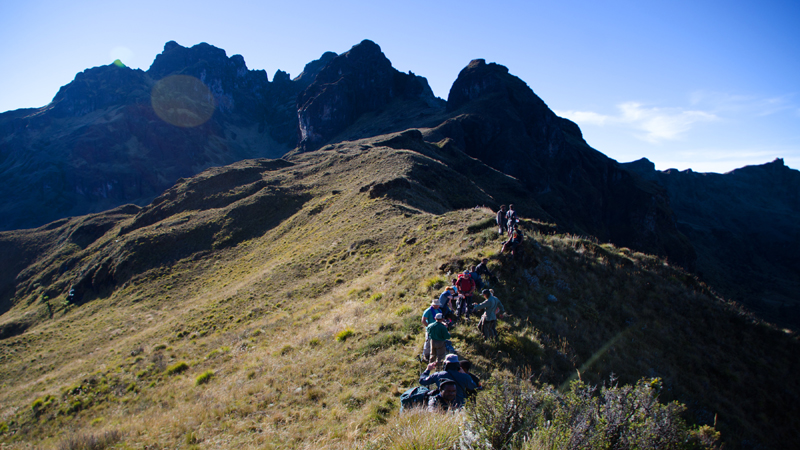 Papua New Guinea’s second highest mountain, Mount Giluwe (4,367m), is part of a volcanic massif. The original volcano on the site of Mount Giluwe formed roughly 650,000–800,000 years ago, probably as a stratovolcano of similar height to the current peak. One of the Volcanic Seven Summits of the world, the usually five-day trek passes through vast grassland and alpine landscapes. 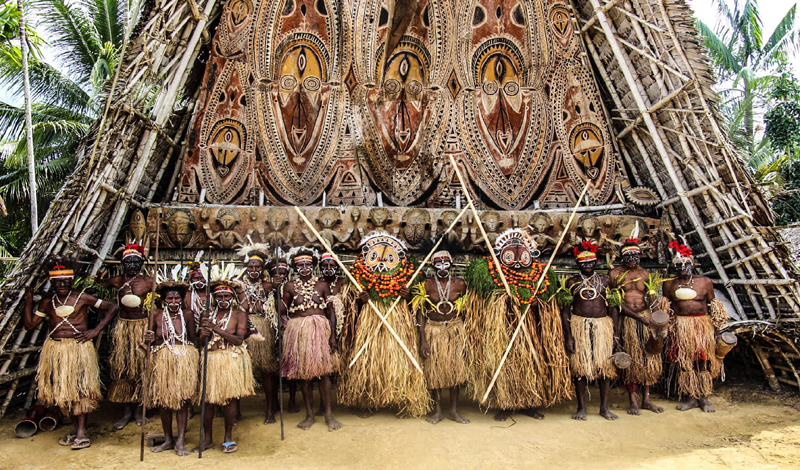 The Sepik is one of the most intriguing adventure destinations on Earth, and the longest river in Papua New Guinea, at 1,126km in length. The Sepik is extremely remote and can only be accessed by boat; be it traditional canoe or luxury vessel. The banks of the Sepik are also home to one of the world’s most infamous cultural ceremonies, the crocodile initiation ceremony and the Ambunti Crocodile Festival.

Sepik Adventures specialises in the Sepik, with owner Alois Mateos hailing from the region. Also check out Trans Niugini Tours, South Sea Horizons and Kalibobo Spirit who all offer expeditions to the Sepik. 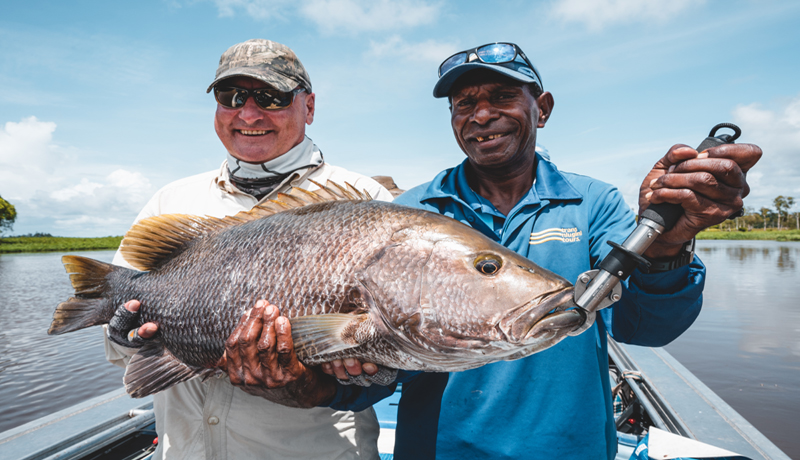 Papua New Guinea’s untouched rivers and lakes, and isolated coastal waters, offer some of the best lures in the world. From the challenge of catching a ‘lure shy’ Papua New Guinea Black Bass in remote rainforest-lined rivers, to showing off a prized Dogtooth Tuna or Marlin catch out at sea, Papua New Guinea has got to be on the bucket list of all fishing enthusiasts. And with 2020 being a write-off, the fishing stocks have had a year to fully replenish - 2021 is set to be the biggest and best year for fishing. 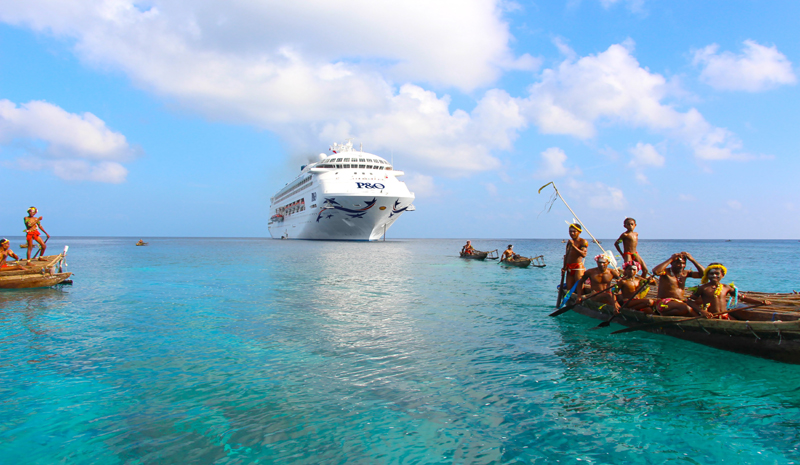 Prior to COVID, Papua New Guinea was fast becoming one of Australia’s and New Zealand’s fastest growing cruise destinations; featuring on the schedules of large-ship brands like Carnival, Cunard, P&O, Princess and Silversea, as well as small expedition-ship brands like Coral Expeditions, Heritage Expeditions, Linblad Expeditions and True North. 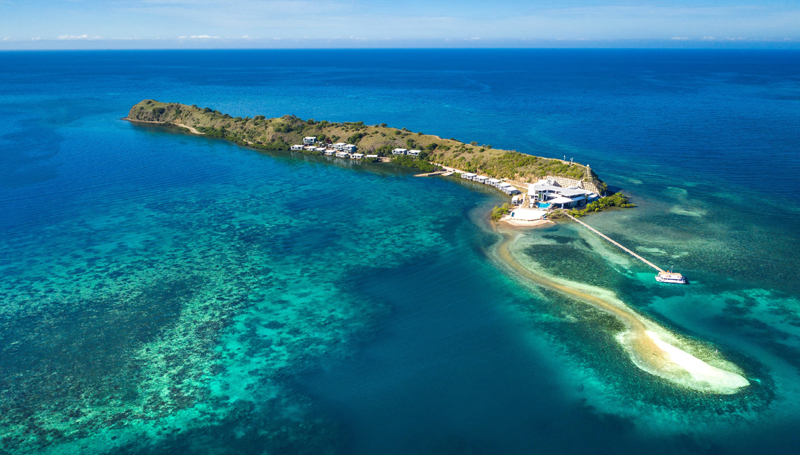 No expense has been spared at Papua New Guinea’s newest luxury tropical retreat - Loloata Island Resort. Featuring 68 suites and villas, some set overwater, guests can choose to while their day away at the pool (with cocktail in hand), get pampered at the Sea Salt Spa or explore 29 neighbouring dive sites.

You can book directly through Loloata Island Resort, or lets Pack Ya Bags organise it all for you.

And that’s just a few of the million different journeys available within Papua New Guinea.
Find your own adventure at www.papuanewguinea.travel